I realised that I hadn’t shown you my photos from a visit to Bilston Craft Gallery last week. The Gallery is a big, beautifully lit space and they have a calendar of very interesting exhibitions throughout the year. It’s part of the WAVE group of venues and you can find more about them on their website. 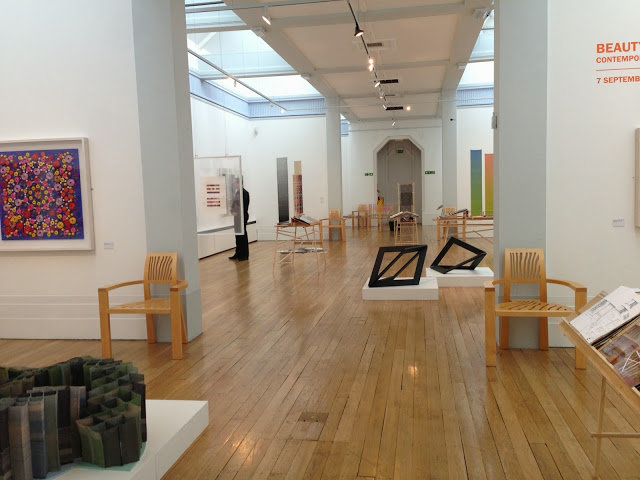 At the moment they’re showing Beauty is the First Test: Contemporary Craft and Mathematics. Now believe it or not, back in school I was quite good at maths and I suppose I still like to have a sense of logic and numerical rhythm in my work. Composition, balance and harmony can all be rooted in maths and it’s a fascinating aspect of art. On display were works by a variety of makers including Michael Brennand-Wood, Janice Gunner and Margo Selby. The giant spirograph drawings were the most eye-catching though. I think that might actually be the biggest piece of paper I’ve ever seen. I’ve photographed it with Linda for scale! 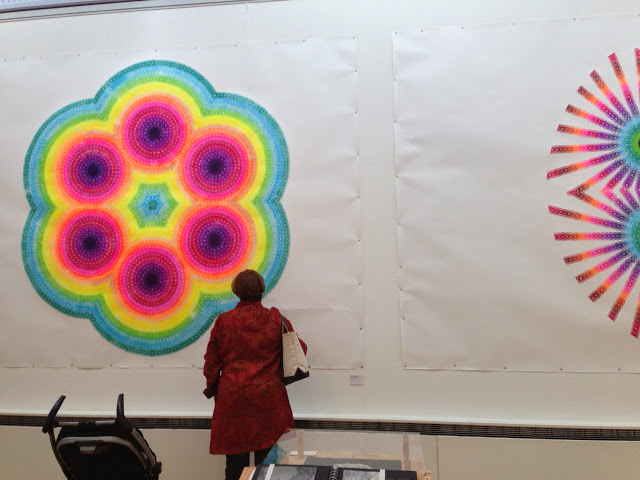 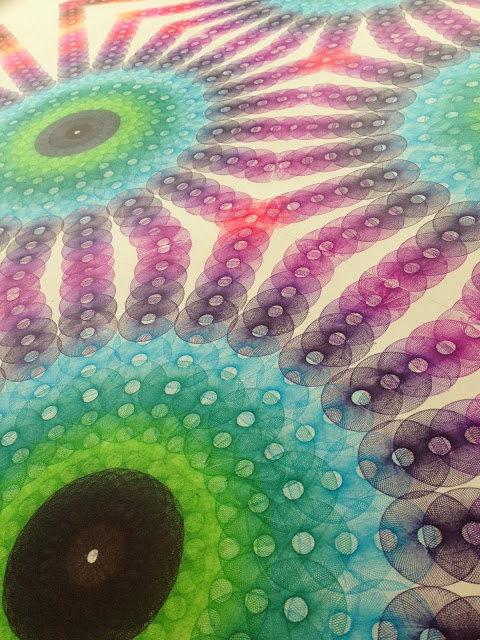 They were done with what appeared to be brightly coloured biro and were strangely compelling. While they looked perfect from a distance, up close there were little slips, squiggles and mismatches which showed the hand of the artist and, I thought, made them all the more interesting. In an era of computer generated everything it’s rather nice to think of the artist scrambling over the paper drawing each of these by hand. 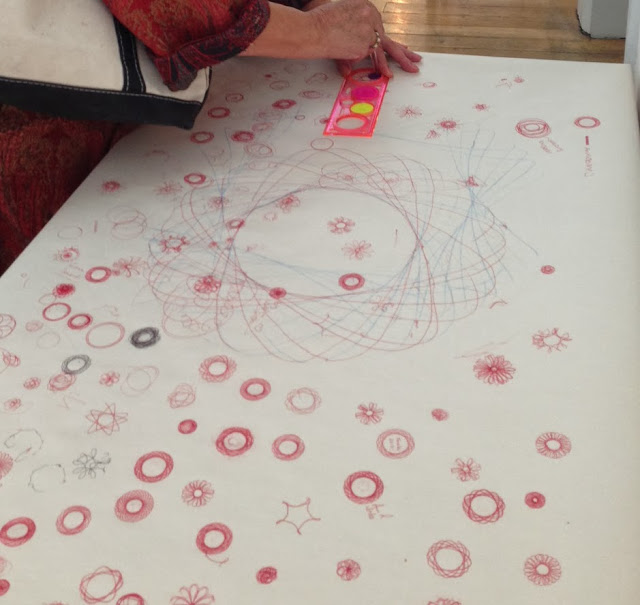 There was a space set aside for having a go. Turns out it’s not my forte, but Linda’s was OK!
The image below is a detail of one of Michael Brennand-Woods pieces. No textile with these particular ones, they appeared to be MDF inlaid with paint. I’m not sure of the techniques involved here, but the essence of the lace patterns appeals to me and they certainly have impact. 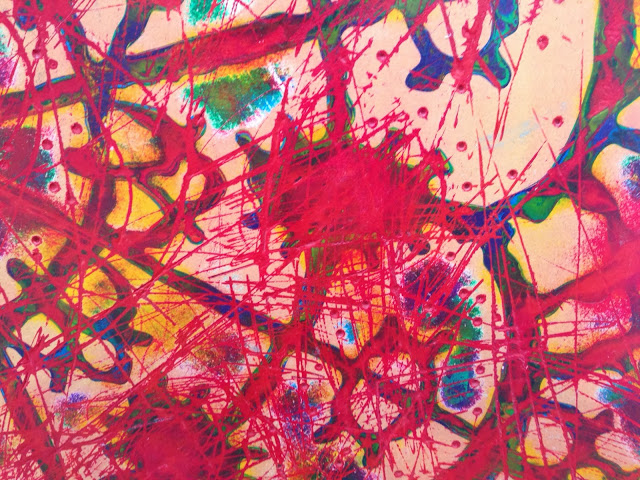 There were also these rather lovely display tables/frames with samples that you could handle, sketchbooks and reference books. They really added to the overall exhibition and the construction of the tables themselves was fascinating. The one below was for Margo Selby a weaver who’s work I’m sure you will have seen before. 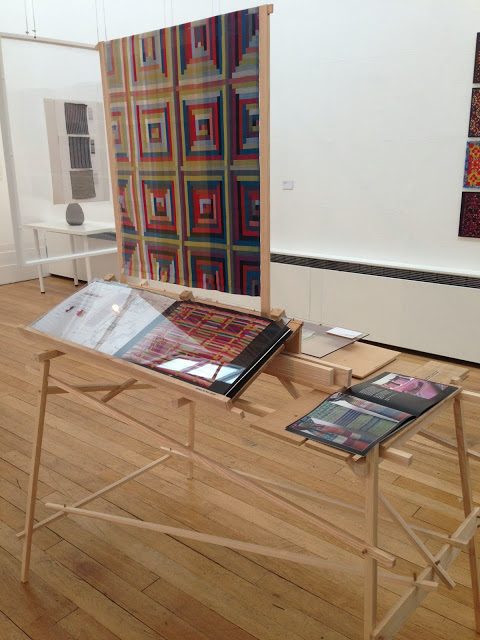 Other hands on areas were perhaps aimed more at children, but we couldn’t leave this tesselating foam puzzle incomplete. I was always intrigued by Escher when I was younger and if you’re a fan you’ll recognise these lovely lizards. 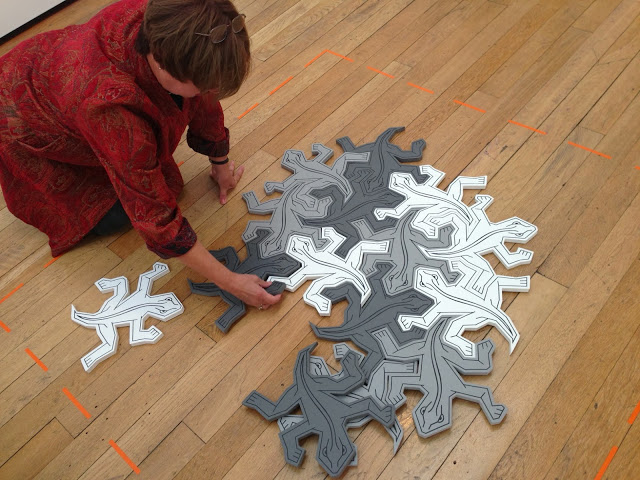 These elegant bobbins formed another of the displays on the tables. 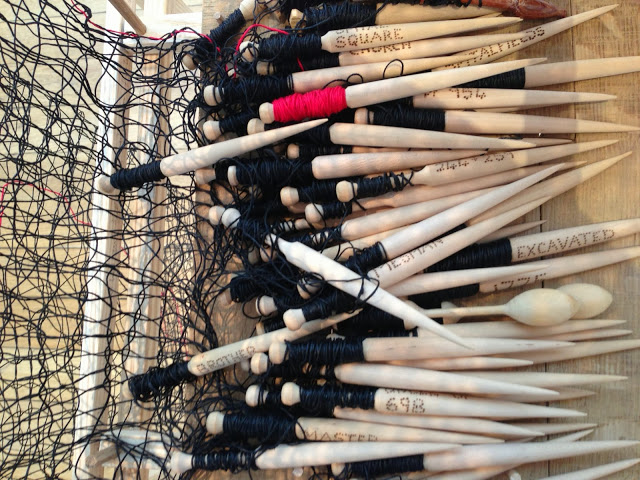 Back home it’s all been about preparing for the move. I’ve been packing boxes and trying to be as organised as possible. Yesterday Amelie and I took a breather and went out for a walk. We found a wasps nest, some lovely little bird feathers and this chap. Turns out he’s the caterpillar of a sycamore moth which while quite beautiful is no where near as much fun as this little punk. 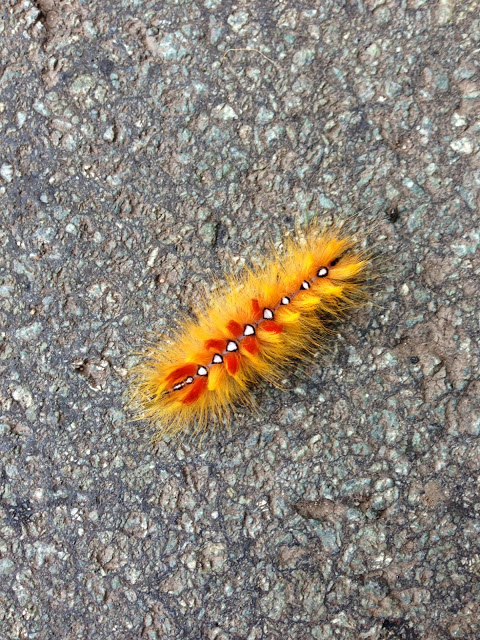