Whenever we teach students about working in sketchbooks we always encourage them to work direct to the page, rather than relying on working on loose sheets and sticking bits in. Now I fully understand people’s reluctance to work direct to the page of a pristine sketchbook in case they ‘spoil’ it! It’s always easier to work onto separate sheets of paper so you can edit the best bits and then glue them in. Indeed, collage is a very valid sketchbook technique when it’s done well. In a way that’s all part of the designing process I suppose and demonstrates skill of a different kind. Do you hear the ‘but’ coming? BUT, lots of random bits and pieces glued to the page tend to look disconnected and lacking the artist’s hand. There are of course creative ways around a lack of visual cohesion:

The image on the left shows  a page from a book about Kew Gardens that I altered. Although this is an altered book rather than a blank sketchbook it presents similar problems to make it work. The tulip flowers were two separate illustrations scattered between lots of text. The photographs had been cropped to only show the blooms and short lengths of stem and leaf enclosed within a rectangular frame. Once I obscured the text by painting over it with gesso, the tulip heads looked as though they were floating in a large empty space. They needed grounding to create a composition that suited the available space and proportion of the page. Using the partial image I had, I imagined how the rest of the plant would look and added long narrow stems as well as broad pointed leaves. By taking the drawing right to the foot of the page I could anchor the original illustrations and make them ‘belong’ and I think it gave the tulips the elegance the cropped image lacked.

Here’s another page with a similar treatment. On the left is the original illustration and travelling across the spine of the book and onto the right hand page is my interpretation of how the plant might look if you could see more of it. It would be exactly the same effect if I’d collaged a photograph into my sketchbook and extended by drawing beyond the rigid edges of the photo. It’s a technique that works with lots of different mediums too – here I’ve just used graphite pencil and the tulip drawing also include artists’ permanent pen.

Of course it could be a wonderful challenge to use colour, matching the colours of the photograph with paint, ink or coloured pencil. On this page the only original bit of the image is that group of leaves and flowers in the bottom right hand corner. The rest of the page is an invention using Derwent Inktense pencils together with graphite pencil and a little wash of watercolour. I hope if you enjoy working into a sketchbook, or if you prefer to take an existing book and modify its illustrations, this article might provide a few ideas of how to integrate separate images into the book so they look as though they really belong there!

Enjoy your sketchbook – it’s one of life’s simple pleasures don’t you think? 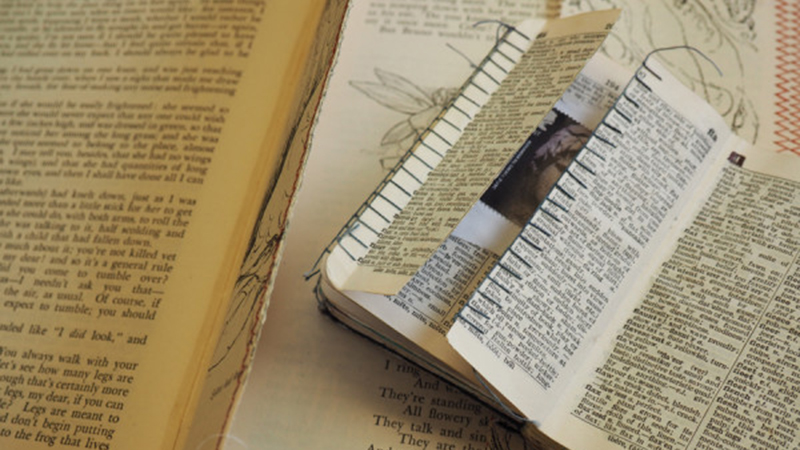 Add extra dimension to your altered book by creating a secret door to hide something special behind. Laura shows step by step techniques which you can work by hand or sewing machine to alter the format of your book pages to hide/reveal some surprises. 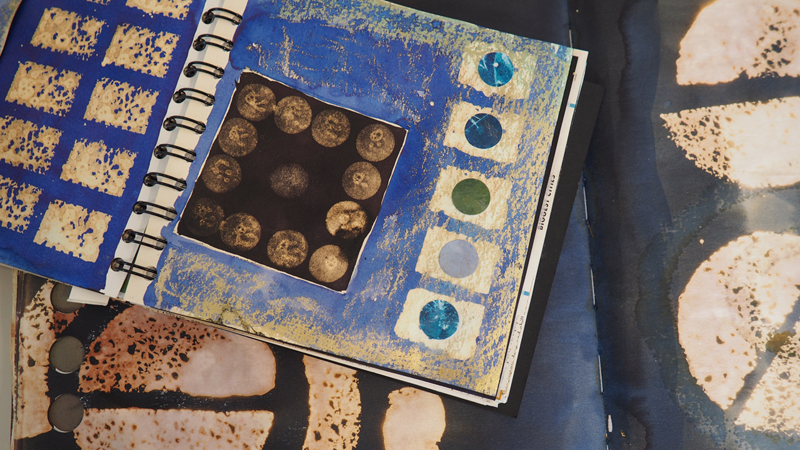 Learn how you can use regular household bleach to create stamped designs in your sketchbook or altered book. Linda will demonstrate using simple print blocks including ones made from her favourite print material – compressed sponge. 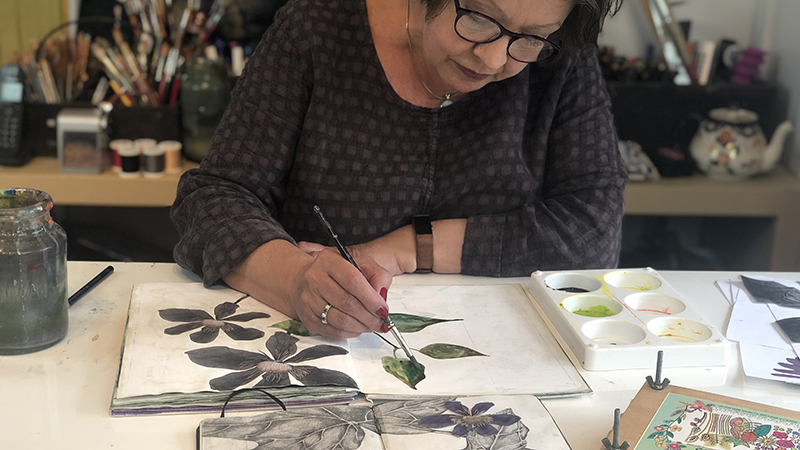 Linda often finds inspiration in nature and in her garden in particular. Join her in the studio to see how she’s incorporating plants into her altered book. She’ll show you a useful technique for when the plant material itself is too delicate to attach directly to the page. 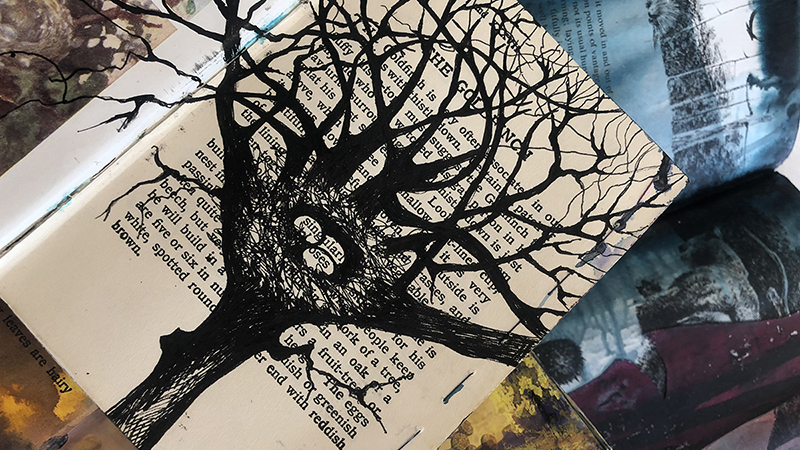 A flip-through video of Linda’s altered book Nests and Eggs. 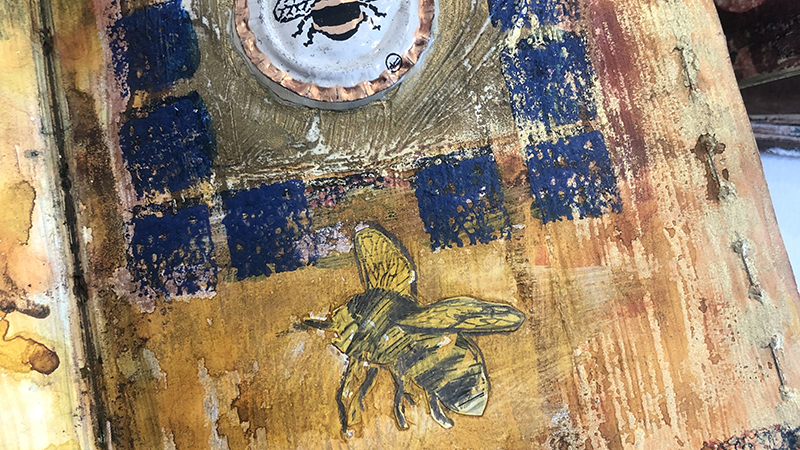 A flip-through video of Linda’s altered book Art is Food. 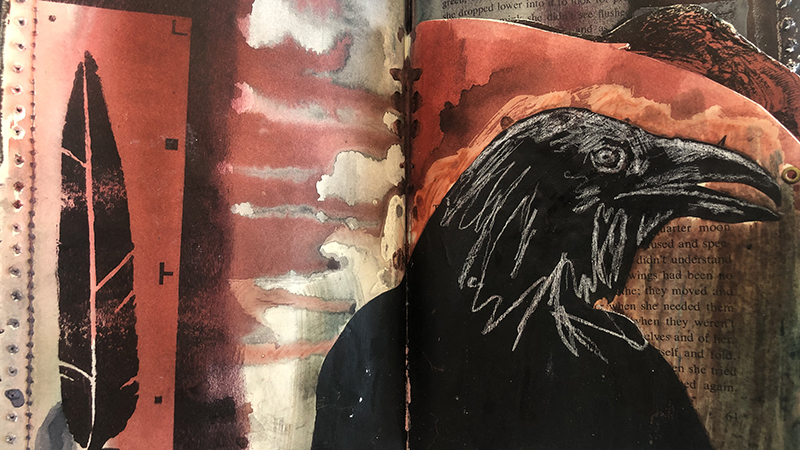 A flip-through video of one of Linda’s altered books. We’ll show you page by page through her book Crow where you’ll spot lots of techniques that we cover in our workshops including stamping and oil pastel and wash. 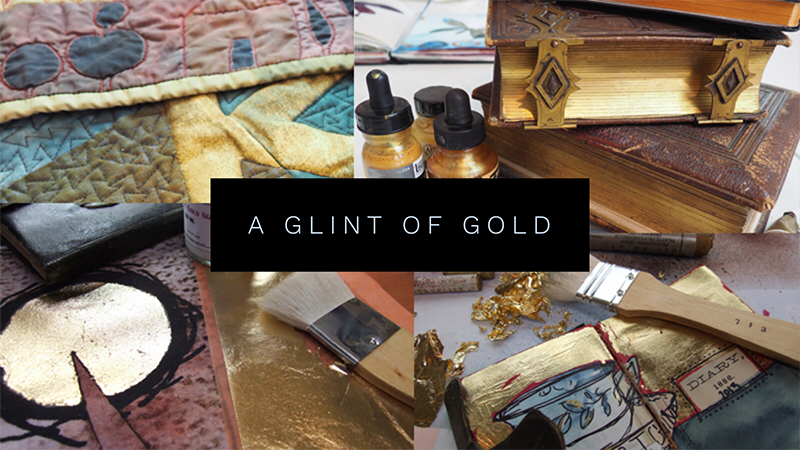 A Glint of Gold

Who can resist a touch of gold? Discover how to add that metallic gleam to your paper and fabric projects. In this workshop collection we’ll show you how to add gold using a variety of media from pens to ink and gold leaf. Learn how to apply gold to your sketchbook pages and to fabric. 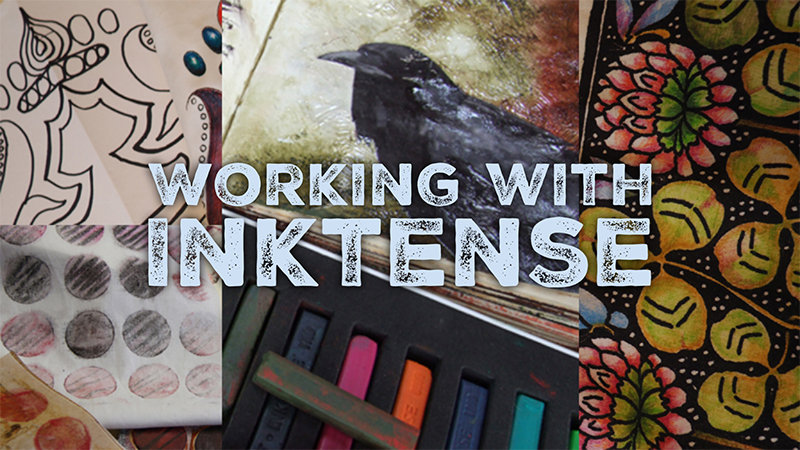 Do you have a set of Derwent Inktense pencils, or blocks? In this collection of videos we’ll demonstrate a diverse approach to using them in your work on paper and fabric. See how to make rubbings, use them to colour fabric, add colour to your altered books and even print with them. There are four workshops in this collection. 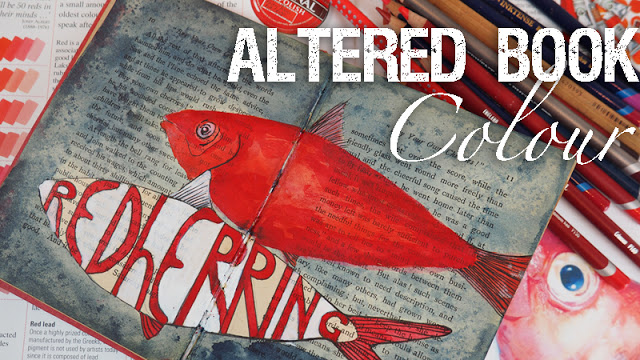 Work along with Linda to make an altered book with a colour theme. Linda uses red but you can choose any colour to work with! See how she creates pages, applies colour theory, makes use of photographs, colour pencils, pastels and paint. There are four video workshops in this collection. 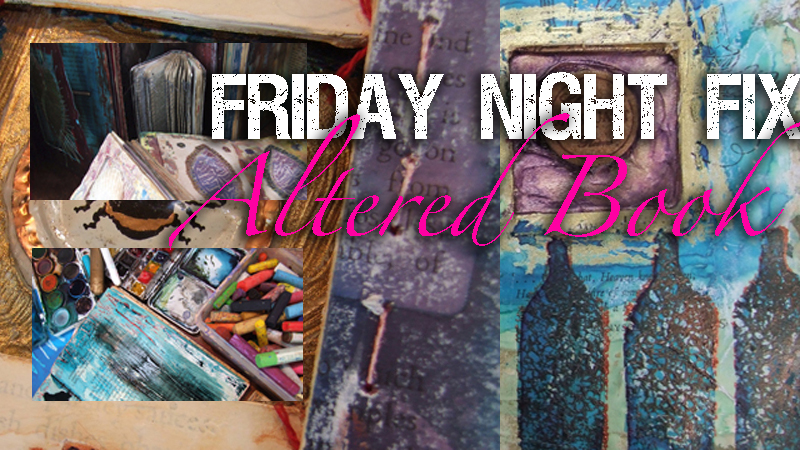 Join Linda for a series of 6 videos that demonstrate effective techniques to alter a food and drink related book. 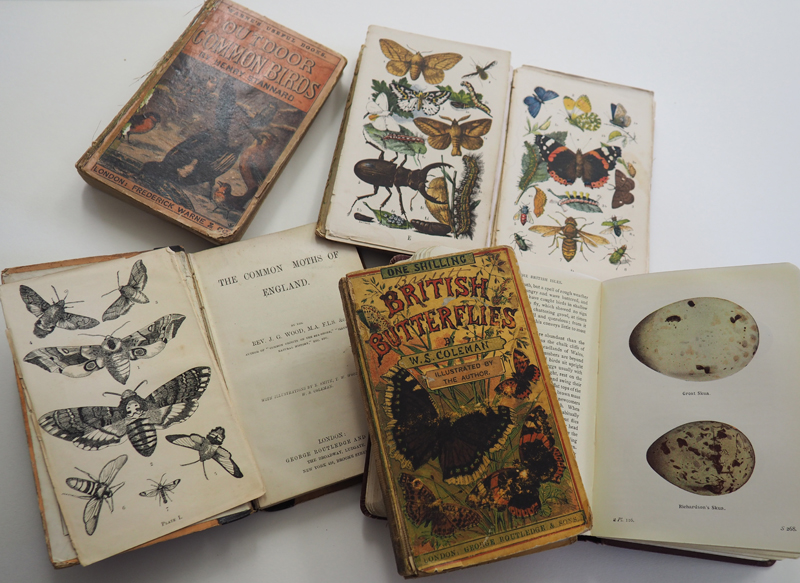 5 Things to look for when choosing a book to alter

If you’ve been watching my series of Altered Book video workshops and want to work along with me to alter a book, but haven’t been able to find the perfect book to alter, here are my top five tips to help. 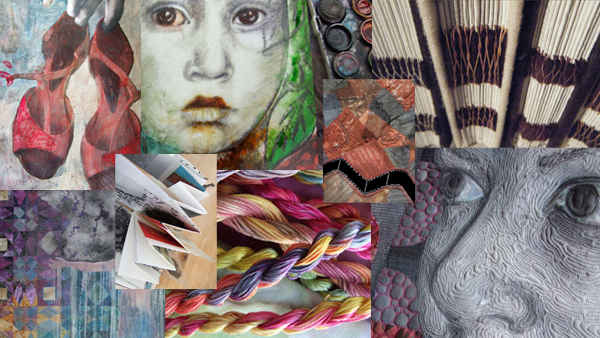 In Archive 2 you’ll find a lively mix of some of the very first shows we taped for DMTV. Ranging from discharge printing, through altered books and free motion quilting, there’s lots to inspire. 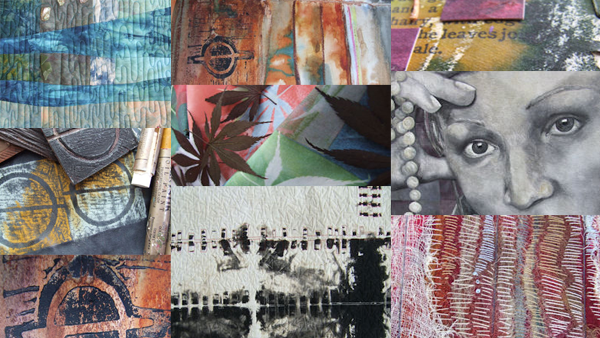 In Archive 1 you’ll find a lively mix of some of the very first shows we taped for DMTV. Ranging from discharge printing, through altered books and free motion quilting, there’s lots to inspire. 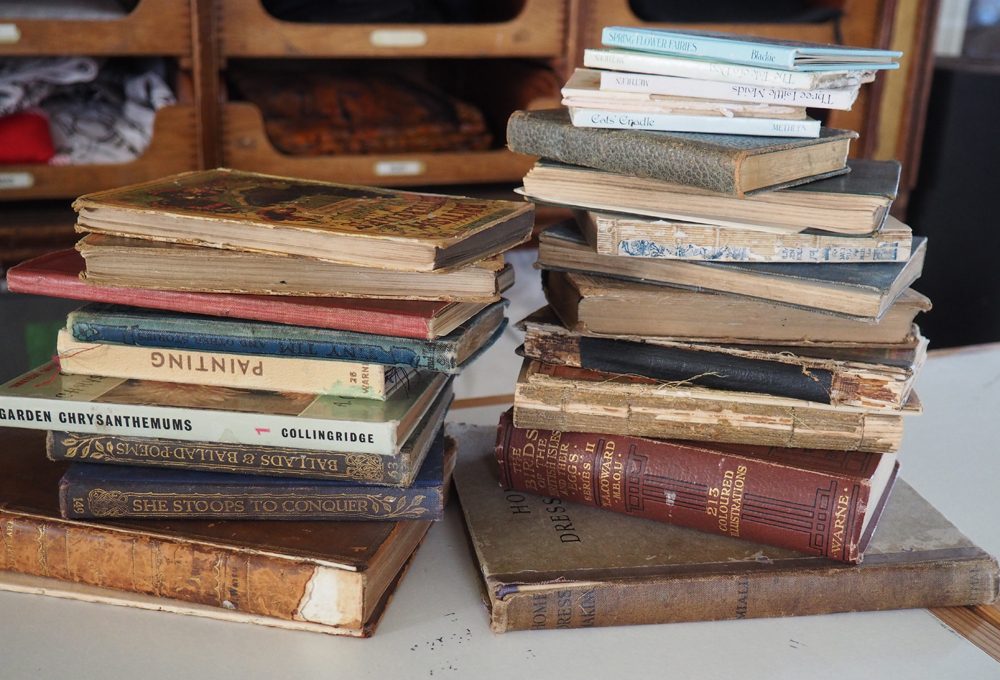 A week of Altered Books

Take a look at some work done by Laura’s students during a workshop on altered books here at the studio.