I’m delighted to let you know that my quilt won The Quilters’ Guild Challenge at this year’s Festival of Quilts. This competition category is always themed and for 2016 the theme was ‘On the Beach’. Lots of visitors to the exhibition have asked about the processes I used to create the quilt so let me explain a bit more about how I made it…

The quilt is a wide one – about 4.3 metres and it’s hung on a curve to enhance the sense of being within the panorama.

I had no intention of entering the competition this year, although I love the coast, we live about as far away from it as possible! It was only when we took an impulse break in Aberdyfi (Wales), that the idea came to make the quilt:

We walk along the path, the ground becoming sandier beneath our feet as the route inclines. With the breeze on our faces and the warm sun on our backs, we reach the top of the dunes and the expanse of the sea rolls out before us. I love that moment, it’s always like seeing the water for the first time. Worries, work, everything slips away and I can breathe.

The quilt is a single image taken using a Panorama function on an iPhone. I did some minor adjustments in Photoshop to prepare the image for printing, but other than that, it’s just the beautiful light of the moment.

So I had a lovely image and the start of an idea. I needed to make a quilt that put the people who would look at it, back in that moment on top of the dunes. The quilt needed to be big, and it needed to wrap around on a curve so that it was barely possible to see the whole thing at once. Just like as I stood on the dunes, you’d have to look left and right to take in the landscape. 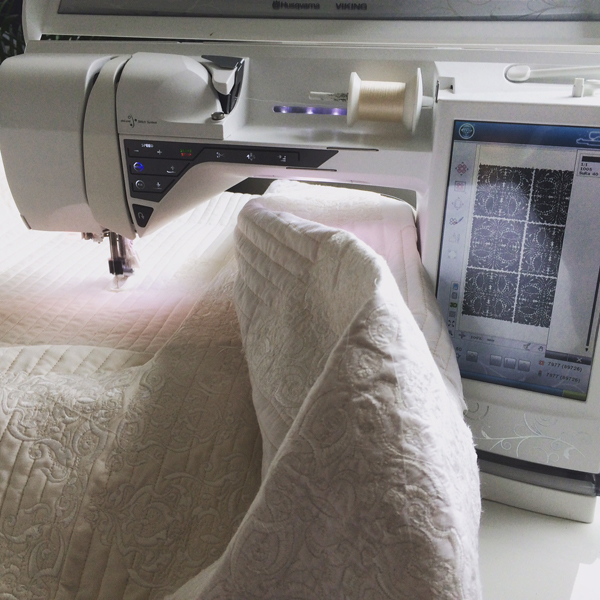 Technically, I wanted to do something I’d never done before, and maybe something that no-one had ever done before. I wanted to create a quilt that would then become a canvas onto which I could print the image. We have a wide format textile printer for our business Fingerprint, (we digitally print fabrics to sell and offer a custom printing service). So I’m used to printing onto flat fabric. The idea of printing onto a quilt, onto something that was already stitched had been in the back of my mind for a while. I’d done lots of research on the net trying to find information. I couldn’t find anything. Did this mean it was impossible? Maybe. 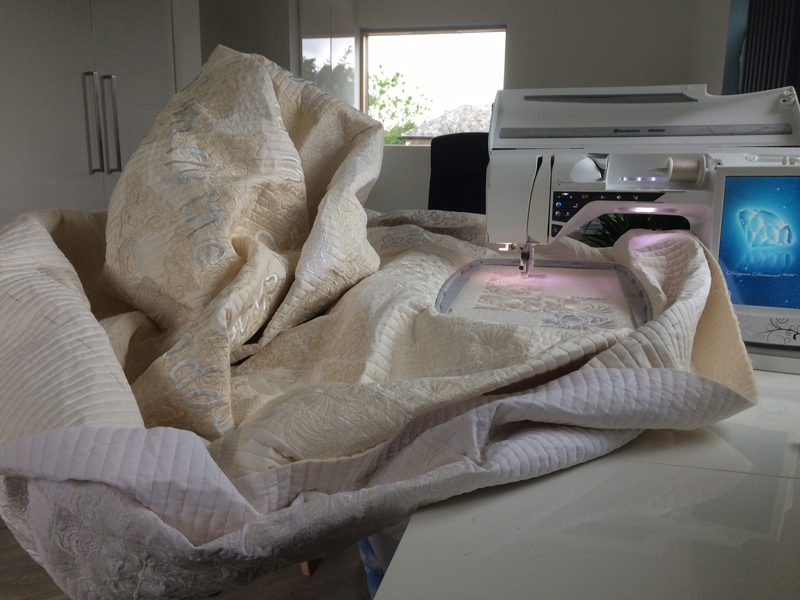 With the scalable size of my panorama photo as a guide, I worked out that if the quilt was 1 metre high it would be in the region of about 4.5m long. I decided that was probably plenty. This quilt will go down in history as being the largest sample ever. Students, please don’t do as I do. Try something first, before you invest over 250 hours stitching something that might not work.

Knowing the quilt was to be printed I cut a coated fabric for the front (we print with dyes so the fabric has to be pretreated), backed it with a cotton poplin and in a middle was a soya wadding. I wanted a very stitchy surface so planned to digitally quilt/embroider, but first I needed to stabilise the quilt sandwich. More than tacking, a project like this needed a foundation of quilting to keep it stable. I stitched parallel vertical lines over the whole quilt at about 1/2″ spacing. This quilting was done on a Gammill longarm, at least one part of the process would be simple. 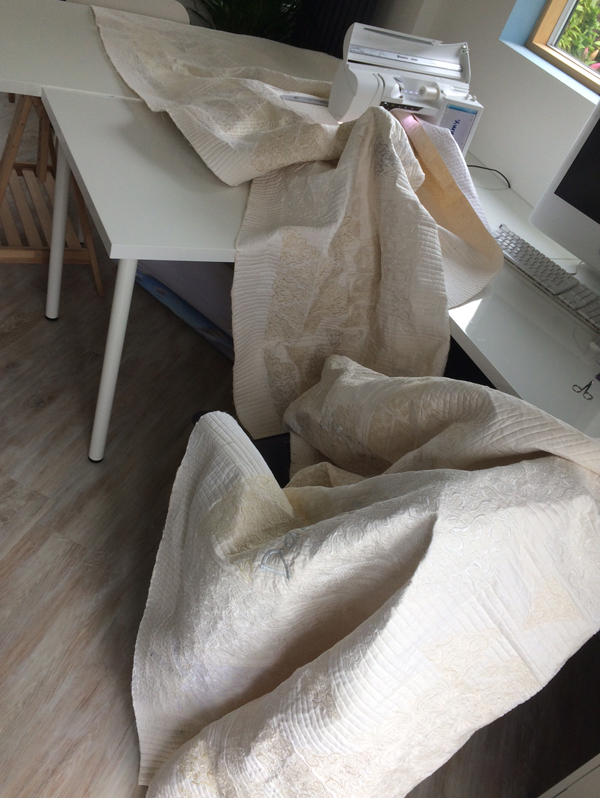 I’m not quite sure how to describe this stitching. I’m using embroidery designs, on an embroidery machine, but I’m stitching through all the layers of a quilt sandwich so to me it’s quilting. There is no getting around this, digitally quilting such a large piece is difficult. This was the hardest work I’ve ever done on a quilt. It’s tricky to hoop and at times almost impossible to fit under the arm of the machine. It’s heavy and fights back! As you can see from the photos I tried to support the weight with tables and strategically placed chairs. The more I stitched, the thicker and heavier the quilt became as I piled on the thread using spool after spool. There are literally tens of thousands of metres of thread in this quilt.

But, all said and done, my machine coped. It’s a Husqvarna Designer Diamond and not once did it grumble, even stitching for up to 14 hours a day. The machine has a great feature which allows precise positioning of the stitch designs. That was invaluable when wrestling such a large piece of work into the hoops as I couldn’t get them in just right, ever! The precise positioning allowed me to compensate for that and get the stitching happening exactly where it needed to be. 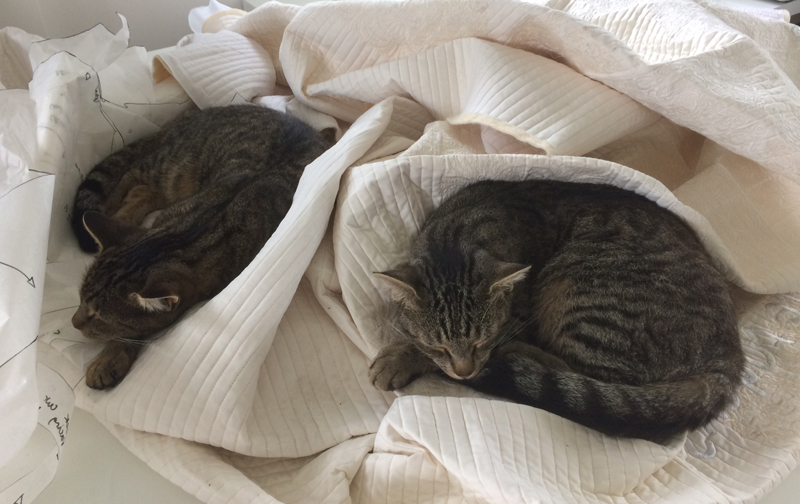 At times I wished that elves would come at night and finish it for me, but all I got were these two helpers. Those of you who’ve used an embroidery unit on your sewing machine will know it’s really important not to impede the free movement of the hoop. Tell that to Taylor… 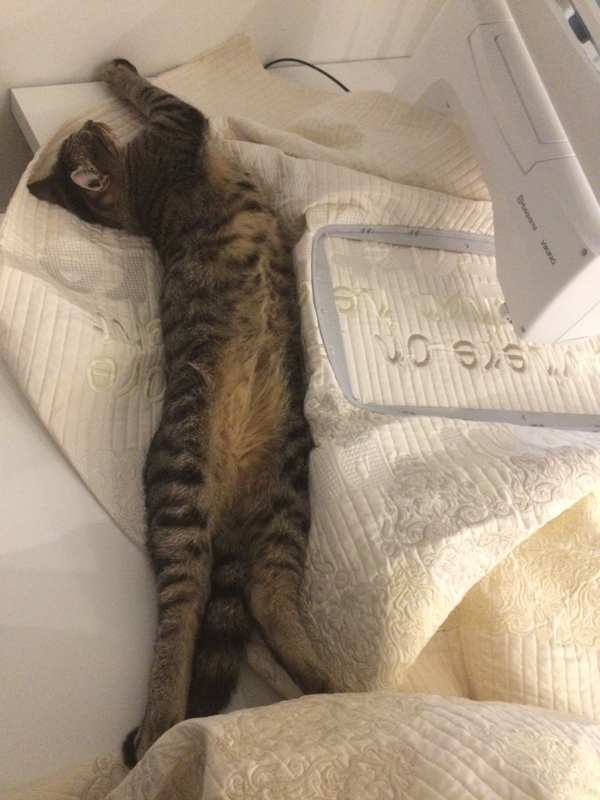 With the stitching I was aiming to build up layer upon layer of thread. First the parallel rows, then lace-like patterns, then text. At times it seemed crazy to stitch hours of embroidery only to cover it with another layer, but in the name of art…!

Why lace patterns? The place that I took the photo is a place that’s very close to my family’s heart. It’s a Kemshall place. The Kemshall’s were once lacemakers. Many generations back the family lived in Nottingham before moving to Calais, another lacemaking centre. We gave up on lace and went to Australia for gold, but that’s another story. So the stitched patterns reference that family heritage. 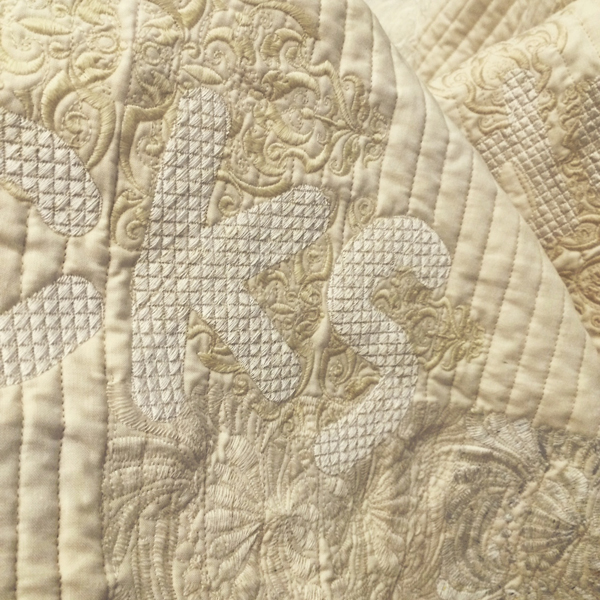 The text on the quilt is a collection of phrases that recall the break by the sea. Things like “Daddy, can we fly the kite today?”, “Just a light breeze”, “Sand in our shoes”, “Mommy, can I paint in your sketchbook?” and the most important one which is repeated, “There is nowhere on Earth more beautiful than here tonight”.

I digitised my own handwriting to create a font and then, using Premier+ embroidery software, digitised that font into stitch. I went large scale with some of the text filling it with a checkerboard satin fill while other smaller size words were simply satin stitched. 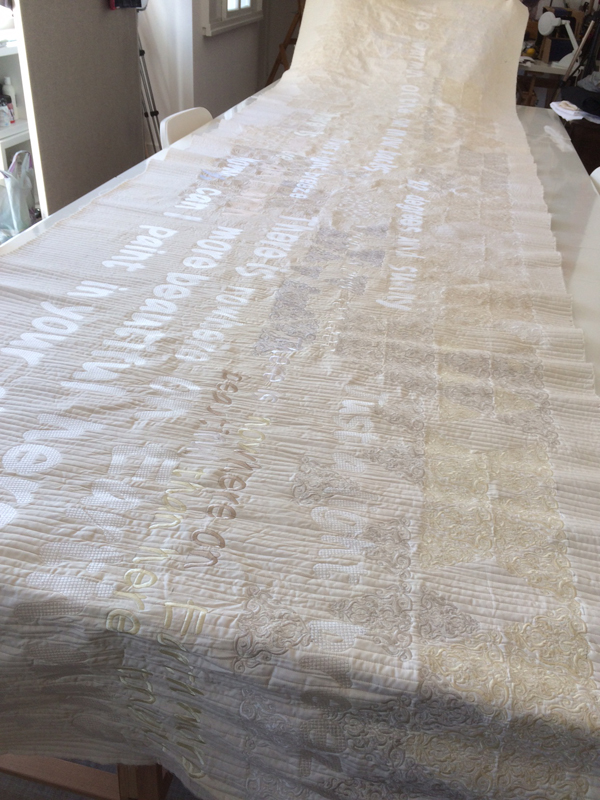 So after hundreds of hours the quilting was done. You can see in the photo I used a mix of very pale colours from white to a very pale lemon and grey. More important than the colour was the character of the thread, and this is where the technicality of what I was trying to achieve starts to come into play. I chose the threads based on how they would react when I printed the image on. We print with reactive dyes so the same principles of hand dyeing apply. I used polyester (Madeira Aerofil) for the vertical  lines so that wouldn’t take the dye. The lace embroidery was done with cotton thread (Madeira Cotona 50), which would take the dye but stay matte and finally the text was stitched in rayon (Madeira Rayon), which would take the dye and have a sheen. You can see the threads catching the light to various degrees in this photo.

Well that was the theory anyway. Of course this hadn’t been tested. I couldn’t just print. I now had to consider the technical aspects of the print process. The fabric was coated, but the thread wasn’t. At Fingerprint we use two main suppliers for our print fabrics. One wouldn’t coat the quilt for me, they said it might not work (at this stage I felt the same), and the other could coat it, but not in the time frame that I could work with. Don’t forget I’m the queen of the last minute and the deadline at this point was little more than a week away. But I have to give a shout out to Whaleys in Bradford who did all they could to try to fit it in.

So I was left with a quilt that needed to be coated. After a sleepless night I thought, I’ll just do it myself. Applying the principles of how the dyes work that I’ve learnt from many years of hand dyeing I make my own chemical solution (probably should say don’t try this at home), and coated the quilt. 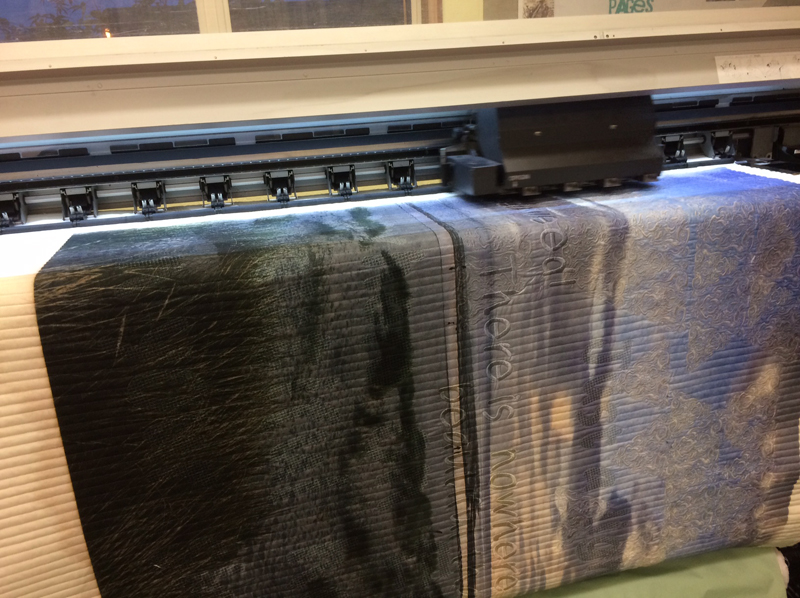 Think of the textile printer as being almost identical to your inkjet printer at home. It’s just wider and takes fabric on rolls rather than sheets of paper. You’ll know what happens with an inkjet printer if you try to put through a bit of paper that’s not flat. It all crumples up, screws itself up inside the printer, jams and makes a horrible mess. Potentially the same would happen with the quilt. If the print head (the bit whizzing across the quilt in the photos) touched the quilt, the results could be catastrophic. Not just for the quilt, but for the printer. The quilt needed to be flat, it wasn’t, it needed to be square, it wasn’t. I trimmed as much as I could, ironed as much as I dare, and held my breath. 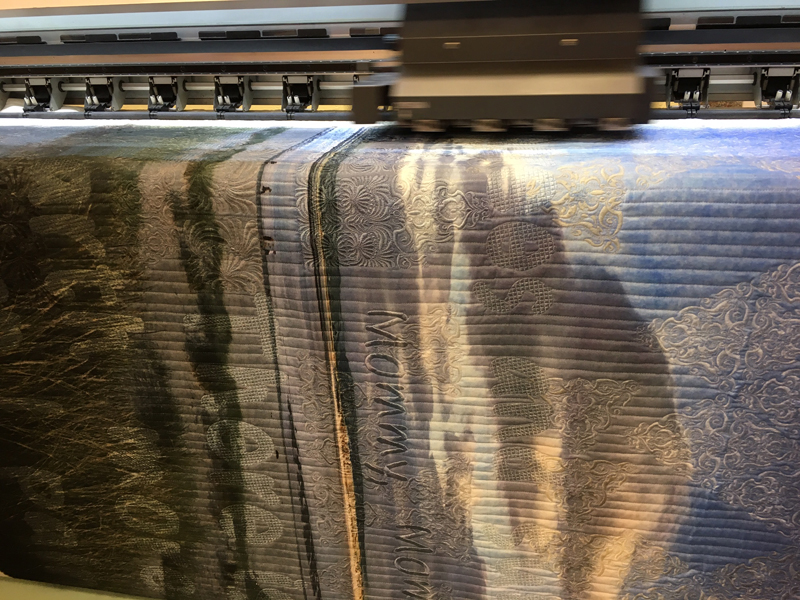 And it was OK.

The printer did it’s job, and my guesswork with how much I could scale the image paid off. I’d been nervous in case the dye bled on the thread. With digital printing there are many variables and settings. It can be quite an art and relies on experience. Course I had no experience of doing this, so just had to wing it. Was I putting down enough dye, or too much? Would my own homemade coating solution even fix the dyes? 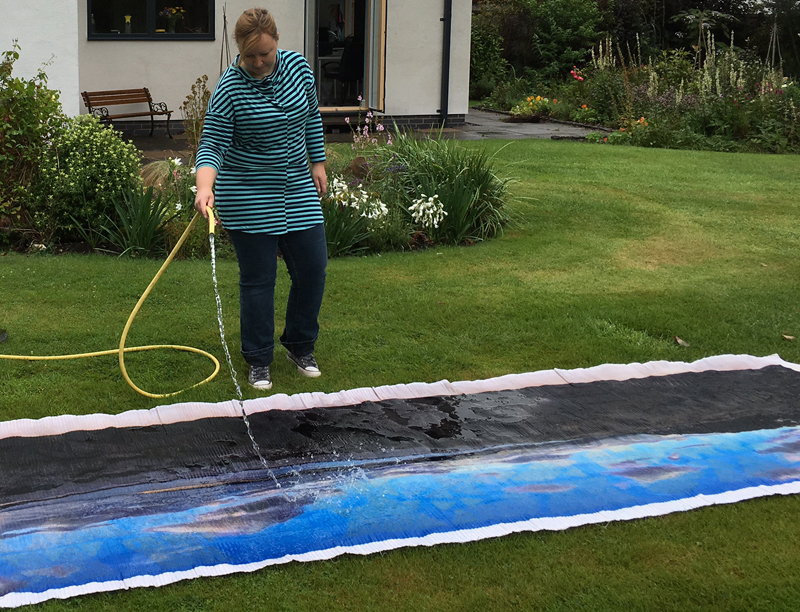 Once printed, the quilt was then steamed. Another risky stage, but by this time my attitude was getting fairly cavalier. Next the quilt needed to be rinsed and washed. I decided the easiest way was to hose it down in the garden before bundling the whole lot into the washing machine. 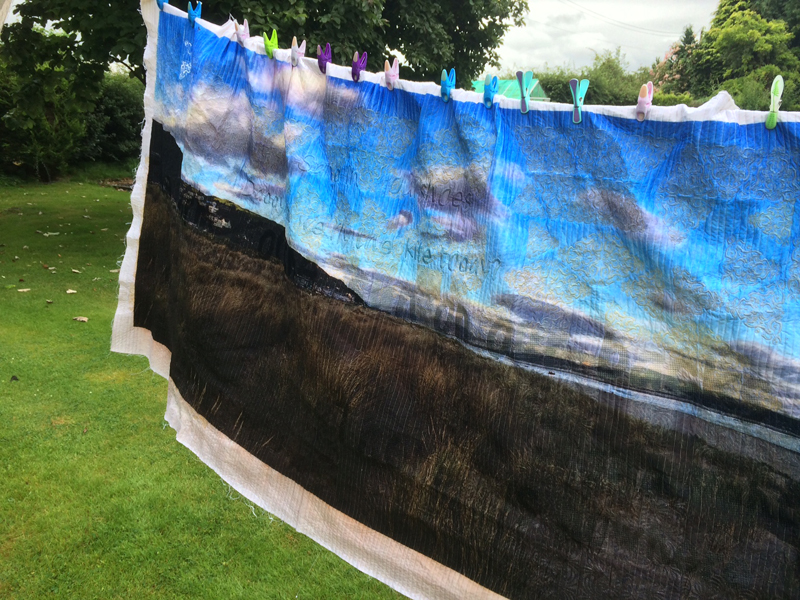 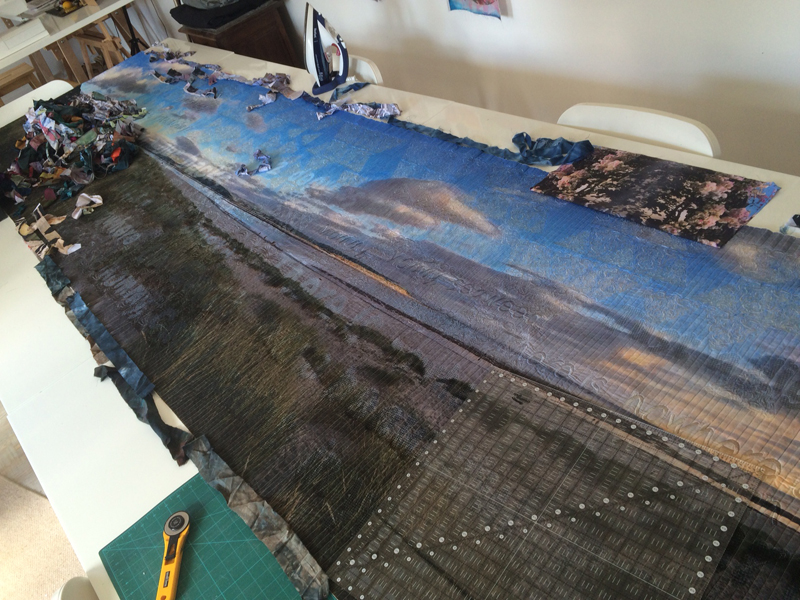 It was too big to fit onto the tables in the studio, but with a metre or so hanging off each end I began the job of finishing. I needed to press and trim the quilt, then sort out the binding and the sleeve. Selecting the binding was a tricky job. I up-ended my basket of 1 1/2″ strips and set to work auditioning them around the perimeter of the quilt. I like a very narrow pieced binding, it’s another opportunity to add detail and enhance colour in the the quilt. 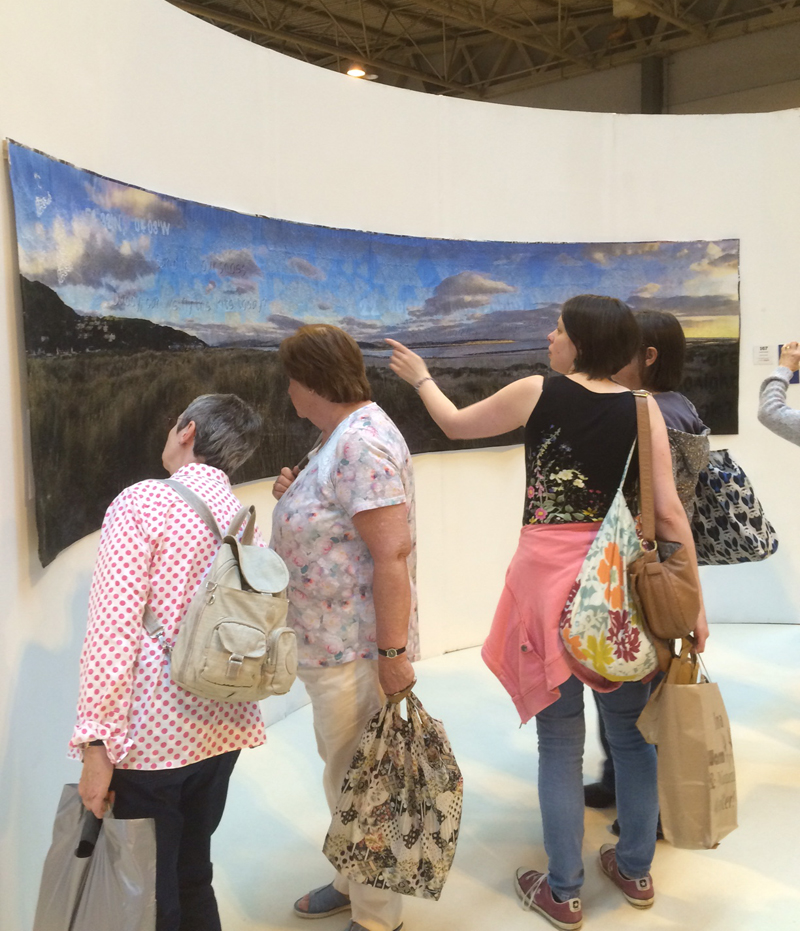 And here it is done. Say it quick and it doesn’t seem so bad! I had no expectations to win. Indeed, I thought it highly likely that the judges would be skeptical about the digital print and digital stitch. I’m very happy to report they go on board with it. Here’s what they said:

“This piece perfectly encapsulates the feeling of being on a British beach. Much more than just a photograph, the intricate stitching and the text enhance the atmosphere enormously.”.

The quilt will now travel with the other winners to The Knitting & Stitching Show at Alexandra Palace. Thank you to everyone who’s said such lovely things about the quilt. Technically it was risky and I am well aware that the use of digital techniques are not to everyone’s taste, but I truly hope that I’ve shown that digital can have soul, and warmth and a special quality.